Zambia officially the Republic of Zambia, is a landlocked country in south central Africa (although some sources consider it part of east Africa), neighboring the Democratic Republic of the Congo to the north, Tanzania to the north-east, Malawi to the east, Mozambique to the southeast, Zimbabwe and Botswana to the south, Namibia to the southwest, and Angola to the west. The capital city is Lusaka, in the south-central part of Zambia.
The territory of what is now Zambia was known as Northern Rhodesia from 1911. It was renamed Zambia at independence in 1964. The new name of Zambia was derived from the Zambezi River (Zambezi may mean “ River”.

Zambia is a landlocked country in southern Africa, with a tropical climate, and consists mostly of high plateaus with some hills and mountains, dissected by river valleys. It is the 39th-largest country in the world, slightly smaller than Chile.

Zambia has some of nature’s best wildlife and game reserves affording the country with abundant tourism potential. The North Luangwa, South Luangwa and Kafue National Parks have one of the most prolific animal populations in Africa. The Victoria Falls in the Southern part of the country is a major tourist attraction.

With 73 ethnic groups, there are also a myriad of traditional ceremonies that take place every year.

In the Zambezi basin, there are a number of major rivers flowing wholly or partially through Zambia: the Kabompo, Lungwebungu, Kafue, Luangwa, and the Zambezi itself, which flows through the country in the west and then forms its southern border with Namibia, Botswana and Zimbabwe. Its source is in Zambia but it diverts into Angola, and a number of its tributaries rise in Angola’s central highlands.

The Zambezi falls about 100 metres (328 ft.) over the 1.6 km (0.99 mi) wide Victoria Falls, located in the south-west corner of the country, subsequently flowing into Lake Kariba. The Zambezi valley, running along the southern border, is both deep and wide. From Lake Kariba going east it is formed by grabens and like the Luangwa, Mweru-Luapula, Mweru-wa-Ntipa and Lake Tanganyika valleys, is a rift valley.

The north of Zambia is very flat with broad plains. In the west the most notable is the Barotse Floodplain on the Zambezi, which floods from December to June, lagging behind the annual rainy season (typically November to April). The flood dominates the natural environment and the lives, society and culture of the inhabitants and those of other smaller, floodplains throughout the country. 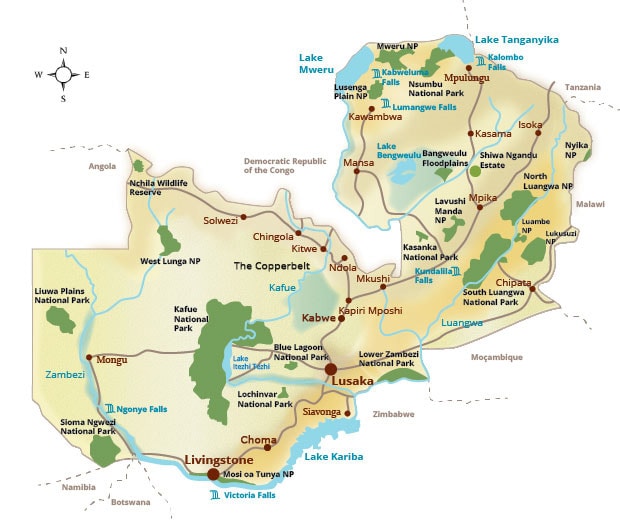 Lake Tanganyika is the other major hydrographic feature that belongs to the Congo basin. Its south-eastern end receives water from the Kalambo River, which forms part of Zambia’s border with Tanzania. This river has Africa’s second highest uninterrupted waterfall, the Kalambo Falls.

A total of 242 mammalian species exist, with most endemic ones occupying the woodland and grassland ecosystems. The Rhodesian giraffe and Kafue Lechwe are some of the well-known subspecies that are endemic to Zambia.

An estimated 757 bird species are known to exist, of which 600 are either resident or afro tropic migrants; 470 breed in the country; and 100 are non-breeding migrants. The Zambian barbet is a well-known species endemic to Zambia.

Roughly 490 known fish species, belonging to 24 fish families have been reported in Zambia, with Lake Tanganyika having the highest diverse and endemic species.